The Scent of Horror 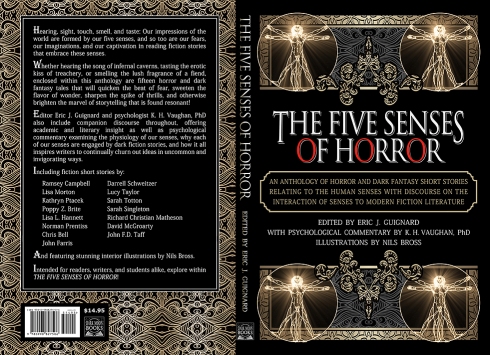 Another story of mine, “The Scent,” will see new life this November.  Eric Guignard, Stoker-Award-Winning anthologist and editor of Horror Library 6, among other projects, has assembled a scholarly look at the way horror addresses our senses.  This collection, The Five Senses of Horror, will be out this November from Dark Moon Books, and features authors such as Ramsey Campbell, Richard Christian Matheson, Poppy Z. Brite and Lucy Taylor.  My story, “The Scent,” will be reprinted from its first appearance in Little Deaths.  More details later…

John F.D. Taff is a writer, published author, raconteur and wrangler of angry stoats. He has more than 80 short stories and 7 novels published. He lives in the great, unspoiled vastness of the Midwest. He has a tremendous wife named Debbie, three pugs, Sadie, Tovah and Muriel, and three great kids--Harry, Sam and Molly. END_OF_DOCUMENT_TOKEN_TO_BE_REPLACED
This entry was posted on Wednesday, September 6th, 2017 at 4:05 pm and posted in Uncategorized. You can follow any responses to this entry through the RSS 2.0 feed.
« Cemetery Dance Notes My Story in Great Review for Behold!
Update on Stuff! »

2 responses to “The Scent of Horror”